Zen and the art of being an ant

by Aditi Mishra  –  Are you competitive? I know I am. People like us don’t live in absolutes – we were born to compare and compete. When we feel petty we compare ourselves to our peers. When we are in an enlightened mood we compete with our previous self.

Being satisfied is not for us. Life is a journey from right now to the next better self/state – eat, sleep, hustle, repeat.

Do you know who else is like us? The common black garden ant.

Perhaps you are surprised. After all who would think that tiny ants compare their present with their experience from their tiny lives? Or maybe this is what you expected from industrious ants. 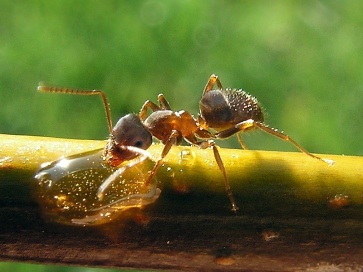 For example, just like humans, House hunting ants show delay (which could mean disappointment) when they are moved from a high quality home (resource nest) to a mediocre one.

But before we say:  “AHA!: The ants are just like us!”, we must know that the same ants show no delay when they move from a low quality nest to a mediocre quality nest. An organism that displays disappointment but not elation is not very human like (at least in its decision making).

Further, disdain for poorer resources may not require a cognitive role but rather can be simply be a matter of higher standards. In the insect world, this might translate into an organism that is sensitive to higher reward scenarios but not lower reward scenarios.

In case you are not convinced just think of time when you bit into a sugary treat like a donut or kajju barfi right before having your tea/coffee. Did your beverage taste bad after the sweet?

But a true hustler not only knows when to fold but also when to raise – of course based on the cards he is dealt. Scientists did exactly that –they dealt the ants different hands. They trained different ant colonies to a sugar water with different sugar concentrations starting at 3%, all the way to 30%. So there were some ant colonies that had experienced only 3% sugar water, some that had experienced only 6%, some only had 9% so on and so forth all the way till 30%.

After training, all these ants were given an opportunity to forage from a 15% sugar solution. Like previous studies, ants accustomed to sugar rewards as high as 30% accepted the 15% reward less while ants accustomed to 3% sugar reward pounced on the opportunity. The ants used to 3% increased food collection by more than 50% while there was a huge drop in food collection in ants used to 30% sugar. Ants used to 15% sugar continued on with business as usual. Further, the scientist showed that mere expectations can change how much the ants forage.

Increasing or decreasing effort according to your experience of reward is a much finer line to walk rather than just setting a lower bound. It requires active decision making for every foraging trip and perhaps even more thought than what many humans put in for their food. This is where the common black garden ant shines. This humble ant not only decreases food collection when the reward is subpar, but it also increases food collection when the reward is more bountiful.

It seems simple, but put yourself in the ant’s shoes for a moment. You are tiny. The distance is mighty. The way has to be marked by pheromones (marking chemicals) that are not easy to make. Having a reasonable expectation of reward, and appropriately signaling if your expectations are met or not could decide how well your colony and nest mates survive. The better you are at judging an opportunity the better the prospects of your colony are.

The idea of paying more attention to relative gains and losses than to absolute values has been encapsulated in the prospect theory proposed by Daniel Kahneman. Since it was proposed, research has shown that humans operate a lot on the lines of relative gains rather than absolute gains. Not convinced? Think of the time you got a raise but not the raise you wanted? How happy were you? Further research has also shown that we typically hate losing much more than winning nothing at all. In fact, to get people to wager something they have you have to offer at least twice that amount in the first place.

But, this is humanity – complex creatures with long lives, myriad experiences and plenty of time to learn from.  What does an ant recall while deciding what to do next? And why? After all, their environments are so dynamic and capricious.

Perhaps it is the huge fluctuations – the feast and famine – that select for systems where relatives are treated more importantly than absolutes. Whatever it may be, I wonder how the ant feels about it. Does the ant feel at all? Does it worry when second best food sources are all it can find? Does it lament the loss of a good time? Does it feel a little burnt out for bringing home the second-best bacon?

Maybe there is no zen for the hustler ant. Or maybe it is too simple to contemplate these things and zen it is.