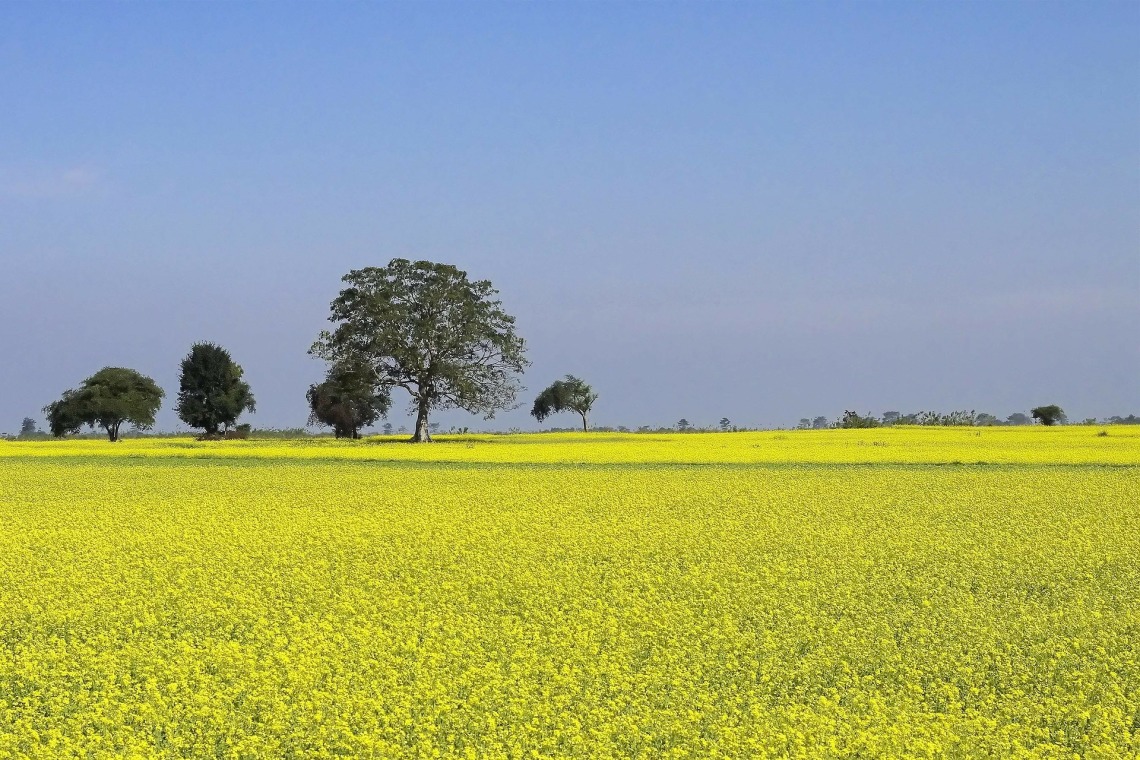 by Sebastian Sturm – Born and raised in Thuringia (Germany) often means being nurtured with table mustard – a spicy paste made from mustard seeds – served with the traditional Thuringian Bratwurst (fried sausage) and other hearty dishes. Nostalgia and withdrawal made me do some research searching for a substitute. The outcome was my first bottle of self-made table mustard made in Bangalore. Today’s NICE – Lab blog is going to present to you some botanical and chemical facts about mustard, topped off with some culinary suggestions. 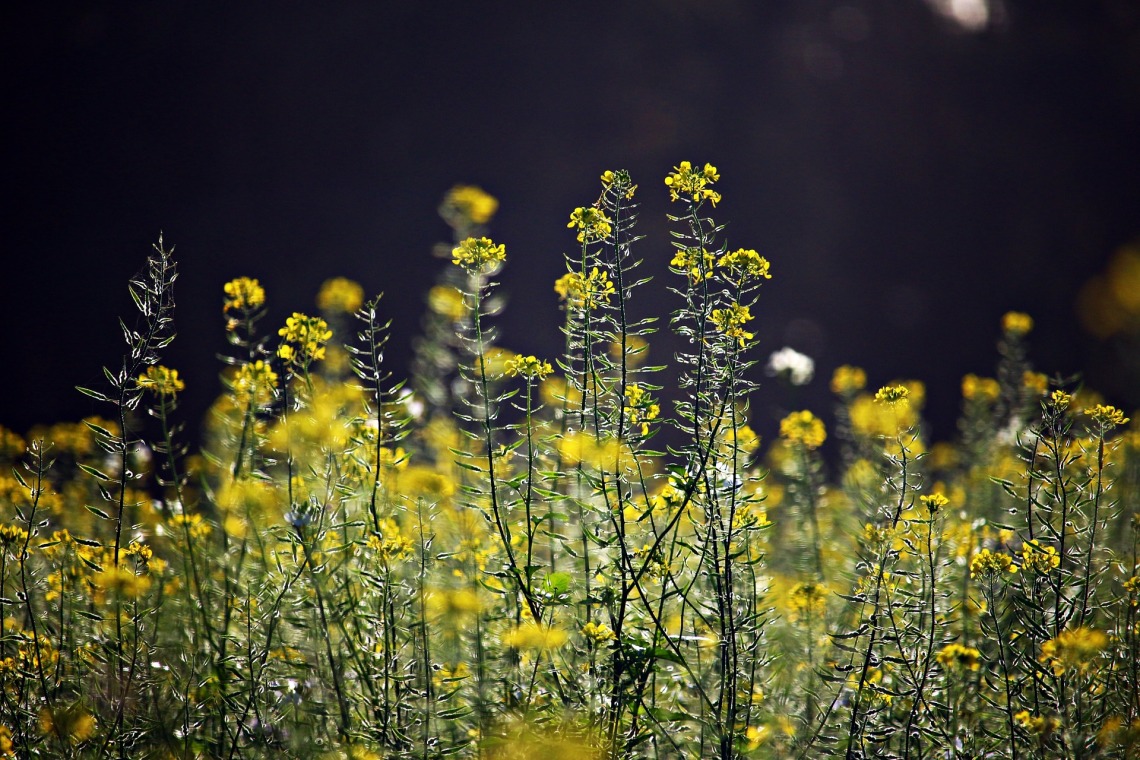 Mustards belong to the plant family Brassicaceae which also contains prominent members such as cabbage, broccoli, horseradish, wasabi and thale cress… Thale cress? Yes, thale cress – also known as Arabidopsis thaliana; not mouth-watering at all but the first plant with a completely sequenced genome.

Mustards commonly used as condiments comprise three species: White mustard (Sinapsis alba), Brown mustard (Brassica juncea), and Black mustard (Brassica nigra). White mustard, and the more tropical Black mustard, are common in Europe, North Africa and the Middle East while Brown mustard can be found in the Orient and Central Asia. All three species are annual plants – they die in winter and germinate from seeds in the next season.  They grow up to a meter and have yellow flowers which develop into seed pods. Like many other members of the family Brassicaceae, mustards possess a specific defence mechanism against herbivores by utilizing a chemical reaction. As in many other cases when plants create toxic or acrid chemicals as defence against herbivores, evolution did not consider the creativity of mankind to exploit them for their pleasure (like we did for capsicum, hops, cannabis, poppy and others). Therefore, mustards have a long tradition of being cultivated for their seeds and leaves in cooking. The first documented recipe of table mustard comes from the Roman writer Lucius Columella and dates to 42 A.D. The cultivation of mustard on the Indian subcontinent has been confirmed from ancient sites of the Indus Valley Civilization (3300 – 1700 BC).

The defence mechanism of mustards utilizes two components – glucosinolates and myrosinase. Glucosinolates are organic compounds comprising of a sugar bound to an amino acid derivate and a sulfate group. More than a hundred different glucosinolates have been found in plants so far. The second component, the myrosinase or thioglucosidase, is an enzyme which catalyses a reaction in the event of defence – just like a torch necessary to light the powder keg. When a parasite or herbivore is damaging the plant both components interact with each other and BOOM! Unlike the torch in the powder keg, the enzyme requires water and time for its reaction. This is the reason why table mustard only tastes bitter and nutty in the beginning and needs a maturing process to develop its characteristic flavour. During the reaction, myrosinase cleaves the sugar from the remaining molecule which subsequently disintegrates into thiocyanate, isothiocyanates and nitriles (derivatives of cyanide). These products are irritating to mucous membranes in the eyes, nose and mouth – if you don’t know what I am talking about, go to a Sushi restaurant and ask for a spoonful of Wasabi. It is interesting to note that the substances responsible for the pungency of Wasabi, horseradish and mustard (isothiocyanates), chili peppers (capsaicin) and the psychoactive substance of cannabis (tetrahydrocannabinol) activate the same receptor in a group of sensory neurons (TRP, Transient Receptor Potential channels; Jordt et al., 2004).

Mustard leaves and seeds are rich in various vitamins and minerals. The glucosinolates and their reaction products have preservative functions, facilitate the digestion of heavy meals and add a luscious and energizing flavour. The greens and leaves are used in some Indian dishes such as Sarson Ka Saag. The seeds are pressed to produce an oil, fried to add a nutty flavour, but most commonly are ground and mixed to make a paste – the so-called table mustard.

Sadly, the generally accepted best table mustard currently produced in the world comes from Bautzen in Saxony (the neighbouring state of Thuringia). From the perspective of a Thuringian – well, at least we hold the title of the best sausages in the world (again generally accepted). Since Bautzen is a small town and is not able to export its big hit all over the world, we need to make compromises and buy mediocre table mustard or make our own one. This month I became a novice in the latter.

The recipe of first attempt

Use white seeds for a mild taste, brown or black for an intense flavour or mix both if you like to. Grind the seed to a powder with mortar and pestle or use a food processor. If you use a food processer use it only for a few seconds and let the seeds cool down again.  The enzyme myrosinase denatures on exposure to heat, just like an egg in a hot pan. If the seeds become too hot, they become bitter and the enzyme won’t be able to cleave the glucosinolates.

Mix the powder with the other ingredients. If you like a sweet mustard, add more honey or sugar. You can substitute the wine with water or diluted vinegar. Let the paste incubate uncovered at room temperature for at least a day and stir it from time to time. The paste will thicken in this time. Fill the paste in a container with a lid or cap and keep it in the refrigerator. The table mustard will last for multiple months since the vinegar prevents bacterial growth. Enjoy your self-made mustard!

Egg in mustard sauce with potatoes (for 2 people)

Boil a few potatoes depending on your appetite.

Meanwhile, prepare the sauce by heating a pan and add about 30g of butter. When the butter is completely melted, add some flour (1-2 tbsp., whole wheat or refined), stir it and let the flour get a golden-brown colour, known as a roux. Deglaze the roux with a shot of white wine and/or some vegetable stock, keep stirring and let it come to a boil. When the desired consistency is achieved, reduce the heat. Add a pinch of nutmeg if you like. When the sauce is not boiling anymore, add a spoonful of mustard and stir it. Taste and add more till you get an intensity you like.

When the potatoes are soft enough remove them from the pan and put them in a bowl with cold water. Put as many eggs as you like to the boiling water from the potatoes. Boil them for 6 minutes. Meanwhile peel the potatoes. When the eggs are ready transfer them in cold water and carefully peel off the shell. Serve together with some butter and salt on the potatoes. Bon Appétit!