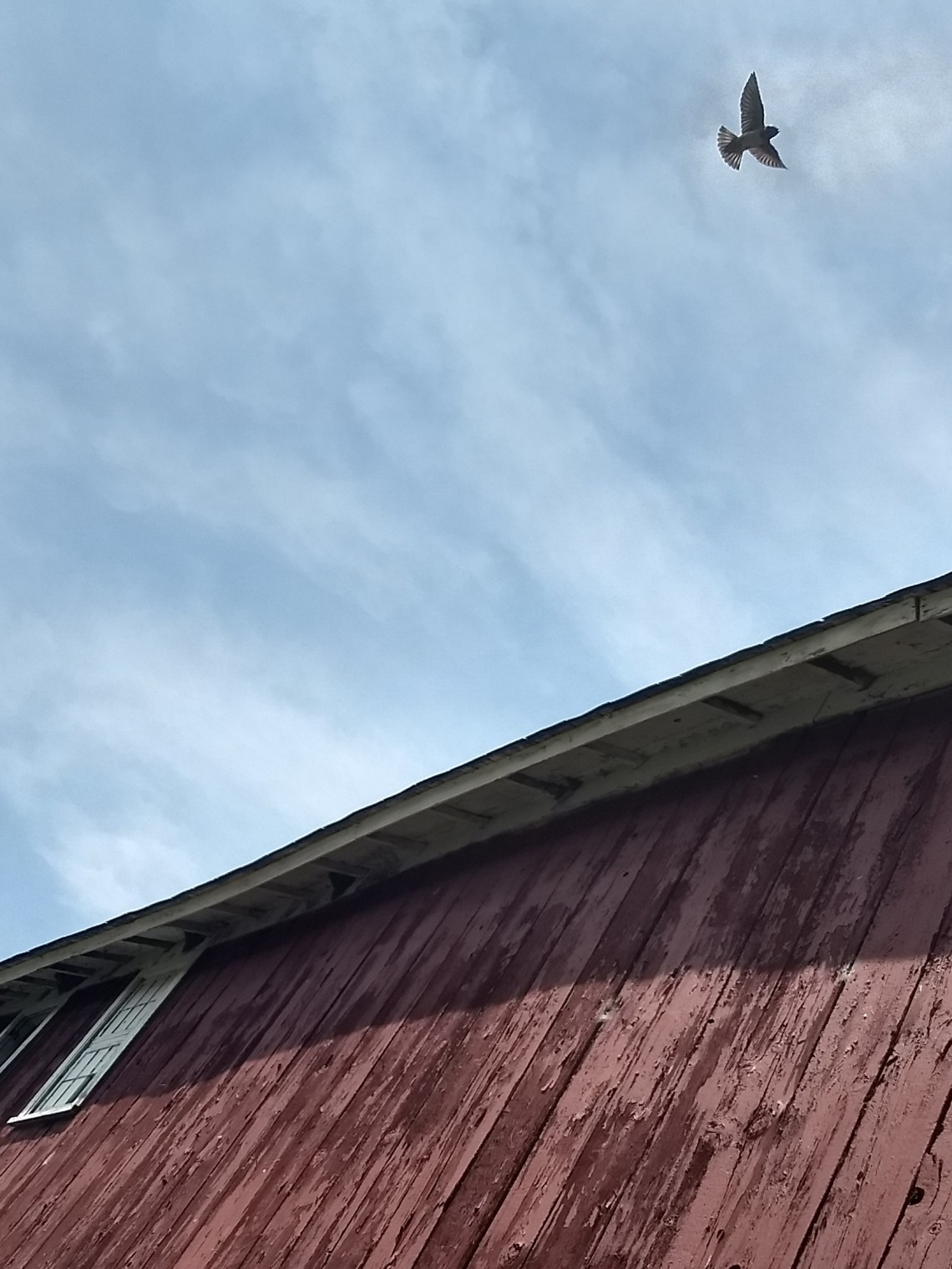 by Cheyenne Tait –“Peeling back the layers of complexity” is a phrase often used in science to give weight to what researchers hope to do or have done in the course of their research. The best way I can think of to better explain this phrase in my own life is by talking about barn swallows, which over time became more and more complex the more I learned about them.

I grew up on a working dairy farm in New York state, complete with the stereotypical big red barn. As long as anyone can remember, the barn has been covered with the oddly-shaped mud-nests of the barn swallows, tucked up under the eaves. The builders, the barn swallows themselves, are small birds, made up of sharp angles, that swoop and dive as they captures and eat flying insects.

As barn swallows approached their nests, even down on the ground, four stories underneath them, we could hear the cheeps and whirs of the baby birds begging for food from their parents – they’re that loud and insistent! If you go to the Cornell University Ornithology page on barn swallows, you can hear what they sound like.

As a child, barn swallows seemed to have a pretty intuitive name: they were birds that lived on a barn and swallowed bugs. How complex could they be, right?

It wasn’t until I was taking an animal behavior course in college that I heard about barn swallows in an academic context: they are model organisms for the study of sexual selection and female mate choice (Møller et al. 1998). Females prefer males with longer tail streamers, although they are more costly for males, and are thus also controlled by other evolutionary pressures (natural selection via predation, etc.). Barn swallows also depend on song and song learning for mate recognition. Additionally, barn swallows also migrate back and forth with the seasons, another major topic in animal behavior that I learned about as an undergraduate.

So as an undergraduate, I began to learn about the barn swallow itself, that it was much more than a bird that swallowed bugs – instead it was an organism with complex behaviors shaped by the world around it.

As a graduate student I have learned even more about the barn swallow, peeled away more of the layers of its complexity. While listening to a departmental seminar, I heard how barn swallow nests are infested with mites. These parasitic mites incur significant costs to the barn swallow’s offspring, and result in changes in parental care behavior (Hund et al. 2015). Additionally, the genetics of the mites can be studied to understand migratory patterns of the birds, and patterns of gene flow between populations of birds (Von Rönn et al. 2015).

So now there’s another layer of complexity to the story of the barn swallows: the mites. They’re part of a vast ecological web of interactions, radiating out from the barn swallows. All of nature is in fact made up of infinitesimal layers of complexity. That’s what makes science such a challenge, and also underscores that nature must be preserved.

To bring this story full circle, barn swallows are what taught me to observe nature while leaving it intact, to “look but not touch”. When I was a child of about 10 years old, there was a nest of barn swallows on the lower eaves, just inside one of our hay shed doors. My father parked a piece of equipment right underneath it, and I couldn’t take it any more – I had to see what the baby barn swallows, that made so much noise, looked like! While my parents were otherwise occupied, I stacked hay bales on top of the equipment in a teetering pile, and then scaled the heap to peer into the mud nest and see 3 wide open, screeching mouths.

A child, and thus never content with looking but not touching, I reached in to pet one of the scrawny, half-naked nestlings on its head. Half-feathered birds are not soft – they’re prickly. But, even more so than that, as you may have guessed from above, this nest was crawling with mites! That were then swarming across my hand! Seemingly, I could feel them on my hand even after I’d washed the moving black specks off – not a pleasant sensation.

Mites may have greatly increased scientific understanding of barn swallows, but since that day, with the memory of mites crawling across my hands, I generally admire nature’s many layers of complexity from a safe distance. At the same time, as a scientist, in my daily life and in my own study system I, like all of my colleagues, use every tool at my disposal to peel back layers of complexity, with the expectation and hope that the process will never end.

← Decoding an Insect’s Sensory World
A Poop Shower of Defense: The Crazy Caterpillar →