Cell with a shell!

by Sriraksha Bhagavan – Can you believe that the shells that you see there are single celled? Oh wait! I am not referring to the big pink Molluscan shell! Look at those tiny ones which are just the size of a grain of sand, those are the shells that I am referring to! And if you guessed they are the babies of the mollusk, keep reading below to know what they are! 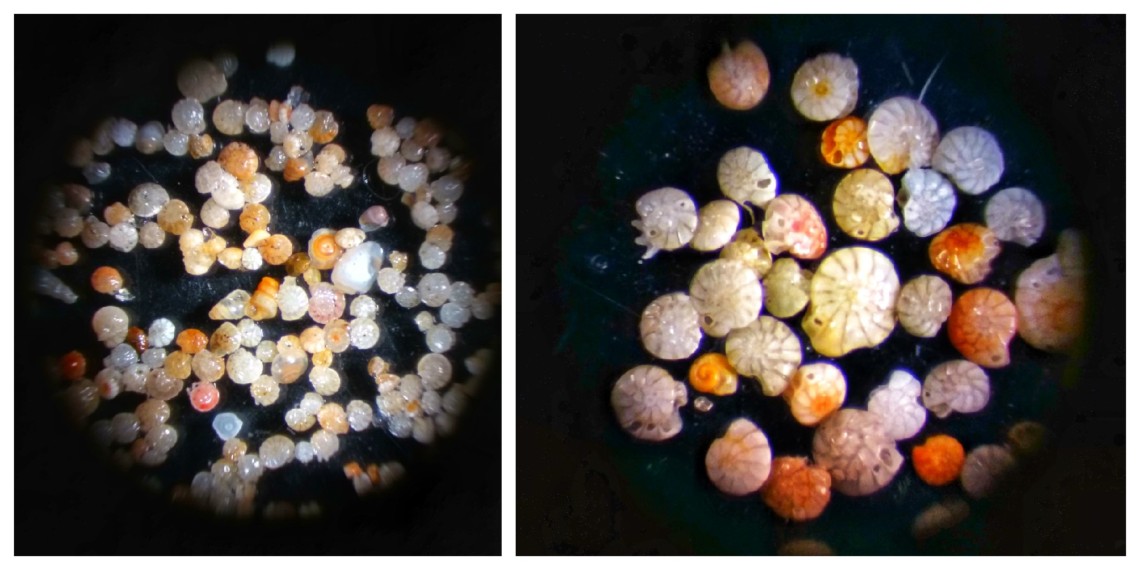 Look at these, aren’t they amazing!

I got introduced to these guys during my Masters in one of the practical sessions where we were given a Petri dish of sand and were asked to search for shells under the microscope. I felt surprised as to how tiny a sea shell could be! I have collected shells on the beach and I never thought that there would be shells so tiny that we need a microscope to see them, and once I found them they kept me fascinated and I kept admiring them. It was even harder for me to believe that they are a single celled with a shell!

These guys are Foraminiferans who have been on this earth since Cambrian period and occur everywhere in the world’s oceans. As cool as they look these tiny little protists are one among the living fossils making them a scientific archive of the past. They have become an important tool for paleoclimatologists to reconstruct and understand ancient ocean conditions.

Foramens look very similar to the shell of mollusks and they come in an incredible variety of shapes. Their shells are predominantly composed of calcium carbonate and act as a glass house capable of trapping solar energy. Their shell consists of successive chambers having a main chamber in the center (where the cell is present) which leads to an aperture. Through this aperture a net of pseudopodia extends connecting it to the outside world. A few species have a symbiotic relationship with algae while some of them feed on dissolved organic molecules, bacteria, diatoms, other single-celled algae, and small animals such as copepods. They are found in all marine environments, but species of foraminifera can be very particular about the environment in which they live.

Next time when you hit the beach, don’t forget to take some sand in your hand and observe the white grains closely. If possible, look at them through a magnifying lens and you might be able to spot these beautiful shells too!

← They are watching us!
Lab Interview with WhiteBoxLive! →