Of Marches and Men

“Education is a capital to the poor man, and an interest to the rich man.”

by Shannon – I have been following the discourse concerning the recent March for Science here in India as well as our own internal institutional discussions with great interest. Among many topics, the discussion has hinged upon differing viewpoints: scientists vs. politicians, biologists vs. engineers, politicians vs. citizens. Each side has valid points to make. These discussions have also led me to consider my own differing viewpoints as well. I hope that you can try and look past the admitted self-indulgence and pigeonholing that follows, and consider the larger issues raised.

The recent reactions to the March for Science have caused me to reevaluate the context of my differing viewpoints. In the flurry of op-eds that followed, I found myself not quite agreeing with my brilliant and eloquent science colleagues, and I wondered why. I am a scientist. Don’t I support science? Don’t I want free and well-funded scientific inquiry to continue? Well, obviously, yes. But I realized that my different viewpoints also come not just from my country of origin but, perhaps even more strongly, from my own socioeconomic background.

I come from a lower middle-class background in a decidedly poor, rural area of the US. I did not go to the best primary schools. I grew up helping my Aunt Barbara bale hay in the summer. And I started working at 14. But I was extremely fortunate to have several things 1) Parents who supported me 2) Teachers who pushed me 3) A country where someone like me can get a great education 4) A somewhat delusional drive to make a difference on this planet. These four things sustained me throughout my training, and have led me to become faculty at what is undoubtedly one of the most unique institutes in the world.

I imagine that those four things are also true for most of my scientific colleagues as well. But while a (relatively) poor country girl in the US can have all four, items two and three are still difficult to achieve for many Indian students unless they have the socioeconomic status to afford good teachers and schools. And this is where the differing viewpoint comes into play. A good education is the great equalizer between rich and poor, and it is still out of reach for so many here in India.

My husband (whose parents were steel workers) and I have often discussed what money brings you. Surely, opportunity is one of the most obvious, but I believe that it also affords you something else – imagination. You see, if you grow up not having to decide between food and clothing, you can afford the luxury of dreams. I might argue, especially here in India, that the conversation between scientists and the general public is less about understanding science than it is about imagination. “Blue skies” thinking is a luxury. It is not that being poor leaves you with no imagination – far from it. It is simply that you don’t have much time to ponder deep sea exploration when your crops are being devoured by locusts. On the other hand, someone who has grown up watching Jacques Cousteau has been allowed at a young age to dream of the Mariana trench, and therefore will strongly and correctly defend that right. If you haven’t had the time to dream for most of your life, the importance you will place on it will likely be less.

The fact of the matter is, while most of India is the former, the vast majority of Indian scientists are the latter. This leads to an odd dichotomy where both sides are equally right. It IS right to dream. It is ALSO equally right to worry about your crops. These two items are not mutually exclusive, and indeed, rely on one another. However, they lead to parallel conversations where both sides argue about completely separate issues. In fact, both are necessary. Science relies on imagination. It is not deterministic, but requires both creativity and exploration. And it is such dreaming that has led to vaccines, the automobile, the internet, and so many advances that benefit each and every person on this Earth.

As scientists, we are taught from early on to attempt objectiveness in our craft. We are told to remove our humanity from our science so that we can observe natural phenomena from an unbiased perspective. Unfortunately, this training has the side effect that we become out of practice with our own humanity. If we can stop and realize that our science is as much a part of our nature as the nature we observe, then I believe that we will not only become better scientists, but better humans. The most human of all the emotions is that of empathy. The ability to share another’s experiences is an essential component of our species. The most necessary ingredient for empathy is communication. Let’s listen to each other. And let’s realize that the ears we bring to the table are equally shaped by our own histories. 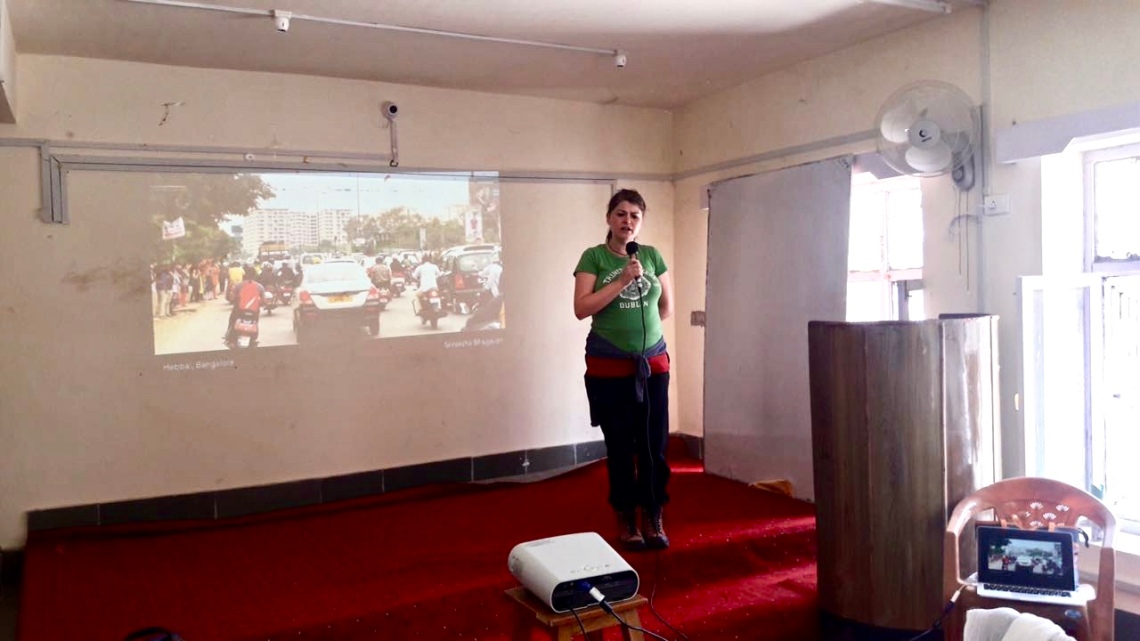 Shannon giving a talk recently to undergraduates in Kargil, Ladakh (Jammu and Kashmir) on her way to field sites.

← What is the fun part of your research? Have you ever thought about it?
Geckos’ tiny toe hair may solve big problems →