Should we ban vertical videos because humans can’t fly? 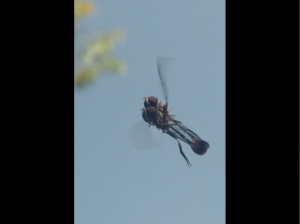 by Pavan Kaushik – Vertical videos are shunned by all self proclaimed net-activists. Why would it be so? A few seconds of thought and we would conclude it’s a result of geometry. Standard video playback devices are landscape-oriented and vertical videos are essentially portrait. And since videos are rectangles and not squares, you can’t superimpose a rotated rectangle onto itself, unless you scale it down. But this would result in wasting screen real estate.

If we agree that that this is the case, we would naturally end up asking the next question. Why are most display devices landscape oriented in the first place? Is it because we write horizontally? Most languages on earth barring East Asian scripts such as totegaki, zongpai and others, are written horizontally. This seems very unlikely by chance, as scripts have originated multiple times in history. What is the reason for the predisposition for most languages to be written horizontally? Looking at the outliers might help us a bit. Japanese, for example, has every character conveying a disconnected idea. This is unlike letters or words in most other languages. It is more like phrases and ideas in a single square block of space. And these independent ideas come together to make a sentence. So, this can be written vertically or horizontally without much hassle. But, scripts like Latin or Devanagari, bead multiple letters to form a word and multiple words to convey an idea. And since we relate to ideas far more than syllables, as syllables are just the means we use to convey meaning to arbitrary combinations of scribbles and sounds. Being capable of understanding the idea in “one go” is convenient, to say the least.

What makes horizontally aligned items easy to read in “One go”? When you look around, one would realize that it is biology. The aspect ratio of our eyes is clearly biased towards the horizontal orientation. And our two eyes are placed horizontally. The geometry of our neck also lets us see far more horizontally than vertically. Pause. Look around, you will see that you see so much more horizontally. And if you notice, it is not just us, most terrestrial organisms are that way. Are the eyes HORIZONtal because of the horizon? If you look at the life history of these terrestrial animals, they have more relevant things to see on the ground than the sky, be it their prey or predator.

But what about organisms who have relevant things in the z direction too? For example, arboreal animals have eyes that are round, unlike ours. But they still have horizontal eyes. Can we run away from the question by saying that it is due to phylogenetic constraint? There are flatfish of the seas who also have very relevant things in the vertical direction. They have moved their eyes to the top, to not waste an eye. Then our best bet to is to look to flight where information from z is a necessity. The pioneers of flight, insects; what do they do? Since they are widely separated from humans in evolutionary time, they have a completely different vision system. And their eyes cover almost all directions. Yet, birds, on the other hand, suffer from the same phylogenetic constraint. Life came on water, then land. The air was conquered last, probably because it needed so many things to be just right for it to be a viable next step.  So, is (lack of) flight the reason why we can’t look beyond the horizon and are limited to the ground? And to make best use of land, we have horizontal eyes, thus making it is easy for us to read horizontally.  And our devices end up fitting our eyes. Does this make vertical video something to look down upon? How would one test this story? I’m not so sure.