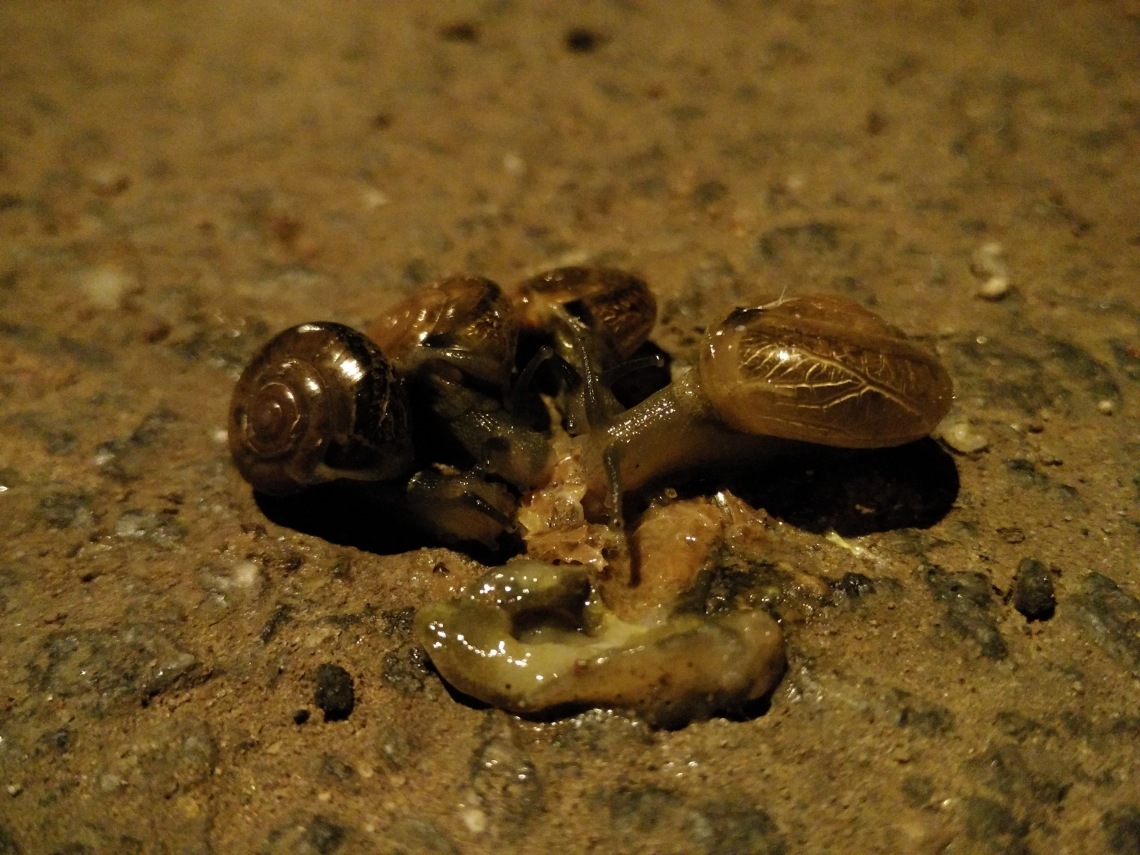 by Pavan Kaushik – Roadkill is touted as the most ethical way of eating meat.  But is cannibalism ethical? I am not sure,  but one thing is certain; snails love road kill and they don’t care about being cannibalistic either. The image explains the story. One light polluted night, in one of the residential streets of urban Bangalore, norms were being broken and snails were crossing the road. The answer to why the snail crossed the road is unclear, but it ended in a crunch.  A little while later, another snail decided to cross the road but got distracted by its dismembered conspecific. Curious the way he is, he decided to investigate the matter.  The investigator concludes, “Cannibalism isn’t such a bad thing, after all, it is road kill”. While he indulges in activities which are considered taboo, the silence is broken. Is this the punishment for breaking taboos? Completely impervious to the events that had unfolded, another snail gets itself involved in the dangerous act of crossing the road. Not only does it decide to cross the road but also decides to be curious. Curiosity killed the snail and this positive feedback loop goes on. When the silence is no longer broken by crunches but by chirping of birds, the loop breaks. At the rise of dawn, the curious and the uninterested do just one thing; take cover from the sun. Few hours from now, the entire story repeats itself.Amidst all this, one can ask many things.  Is this behavior specific to snails? Based on my personal observations, the exact same phenomenon occurs with squirrels on highways. Anecdotal evidence from others exist recounting similar stories with other rodents. These organisms predominantly feed on detritus, fruits and seeds and very rarely meat. Then why would they indulge in opportunistic carnivory (scavenging)? What could be the proximal and ultimate explanations for this behavior? What is the sensory basis of this aggregation behavior? Is this an artifact or is there a meaning in this madness? Understanding this might provide insights on decision making and may answer the long standing question of why did the snail cross the road?