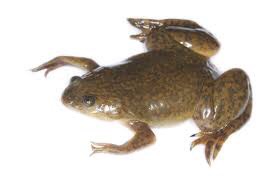 by Srishti Batra – Xenopus laevis is an African species of aquatic frog. These slimy creatures are a great model system for developmental biology, cell biology and physiology. Their oocytes are as big as 1mm, and molecules can be easily injected into them. They can translate exogenous mRNA into proteins, but don’t perform DNA replication. This makes oocytes a very well-known system for heterologous expression, that is, mRNA from different species is injected into them, which then gets translated into functional protein. This is the reason that they are also famous as a protein synthesis factory.

I have been using this system to study channel properties of insect olfactory receptors.  Xenopus is evolutionarily quite distant from insects, but when mRNA of insect ORs is injected, the functional protein is translated. Once the protein is available, we can study its ion channel properties using electrophysiology. Presently, I am setting up the two electrode voltage clamp technique to study heterologusly expressed insect ORs in xenopus oocytes.

← Coffee in the news
Food for Thought →